Plant a tree in memory of Frederick
An environmentally-friendly option 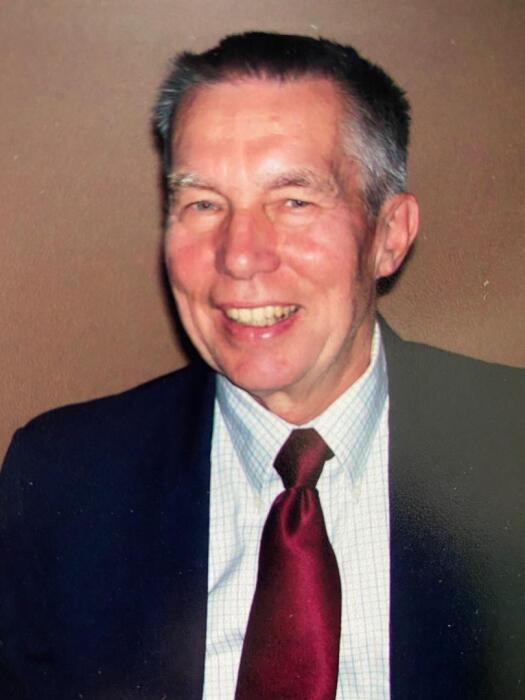 Frederick "Fred" Burton Seeley passed away peacefully at home on March 17, 2021, after a long battle with Parkinson's disease. Fred was born August 14, 1935 in Hammond, Indiana to the late Harriet Janowitz Seeley and Burton Frederick Seeley. He attended Texas Western College in El Paso, TX, where he received a Bachelor's of Science in Physics and served as president  of his fraternity. On Valentine's Day in 1954, he met Priscilla Ann Bynum, and the couple married on July 9, 1958. They settled in El Paso, TX, where Fred served as a Lieutenant in the United States Army. In El Paso, Fred and Priscilla had three sons, Scott Randall Seeley, Mark Otto Seeley and Paul Burton Seeley. He received his Masters of Science in Physics from Arizona State.

The Seeley family moved from El Paso, TX to Huntsville, AL in 1968, and have considered Huntsville home since that time. Fred worked as Chief of Metrology and Calibration of the TMDE Support Group on Redstone Arsenal until his retirement at the age of 52. He then pursued his passion for science and education, and began teaching graduate level physics courses at the University of Alabama at Huntsville,. At the same time, he operated a research laboratory studying sonoluminescence, and developed and patented processes related to this field study. Fred defended his thesis and graduated with a Doctorate of Philosophy in Physics at the age of 62, earning recognition from the president of the University for his accomplishment.

Fred was a passionate scientist, but also enjoyed many diverse hobbies including traveling, biking, camping, ballroom dancing, cooking, and reading. He was also a pilot, vocalist, guitarist, pianist, and sports enthusiast. During summers, Fred and Priscilla enjoyed traveling with their children and grandchildren in their RV. The couple traveled to every state, exploring museums and documenting their exploits on film and video to share with their loved ones.

In his second retirement, Fred and Priscilla traveled to Florida every winter and Ohio every summer for biking, often riding more than 50 miles a day. They also became expert ballroom dancers, and demonstrated the Argentina Tango, Foxtrot, and Waltz at showcase events.

Fred was diagnosed with Parkinson's disease in 2008, and dedicated significant time to researching treatments and lifestyle changes to combat his disease. He served for many years as president of the Parkinson's Association of Huntsville. Refusing to resign himself to the diagnosis, he fought his physical changes through Rock Steady Boxing, Tai Chi, and other fitness programs, sometimes spending up to 3 hours a day doing various workouts and therapies. He never complained, always persevered, and maintained his humor despite his physical struggles.

Fred was a devoted husband, father, grandfather, and great-grandfather. He boasted a quick witted sense of humor, and was a captivating story-teller. He instilled a sense of curiosity and love of learning into his family. He exemplified a servant-hearted man in all aspects of life.

Fred is survived by his wife of 62 years, Priscilla Seeley, and their three sons: Scott Seeley (Christina), Mark Seeley (Lee), and Paul Seeley (Cindy). He is also survived by his sister, Sharon Strattis, seven grandchildren, and one great-granddaughter. He is preceded in death by his parents, Harriet and Burton Seeley, and his brother, Daniel Seeley.

In lieu of flowers, memorials may be made to the Monte Sano Methodist Church, 601 Monte Sano Boulevard, Huntsville, AL 35801.

Plant a tree in memory of Frederick by clicking here.
To send flowers to Frederick's family, please visit our floral store.

A service summary is not available

Plant a tree in memory of Frederick
An environmentally-friendly option

Plant a tree in memory of Frederick

2 trees planted in memory of Frederick

Wishing you peace to bring comfort, courage to face the days ahead and loving memories to forever hold in your hearts
Bucky and Pam Rea

A Memorial Tree was ordered in memory of Frederick Burton Seeley, PhD by Bucky and Pam Rea.  Plant a Tree

A Memorial Tree was planted for Frederick Burton Seeley, PhD

Plant a tree in memory of Frederick